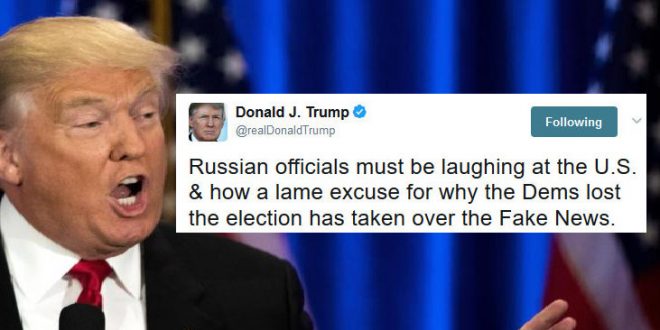 Trump: Russia Is Laughing At Our “Fake News”

President Donald Trump wrote on Twitter Tuesday morning that “Russian officials must be laughing at the U.S.” over the ongoing investigations into Russia’s efforts to interfere in last year’s election and the significant amount of media coverage those probes have generated.

Russia’s campaign of cyberattacks targeting the 2016 election, as well as the possibility of collusion between the Kremlin and individuals with ties to Trump or his campaign, is the subject of investigations by both the House and Senate intelligence committees as well as a special counselor appointed earlier this month by Deputy Attorney General Rod Rosenstein.

Russian officials must be laughing at the U.S. & how a lame excuse for why the Dems lost the election has taken over the Fake News.