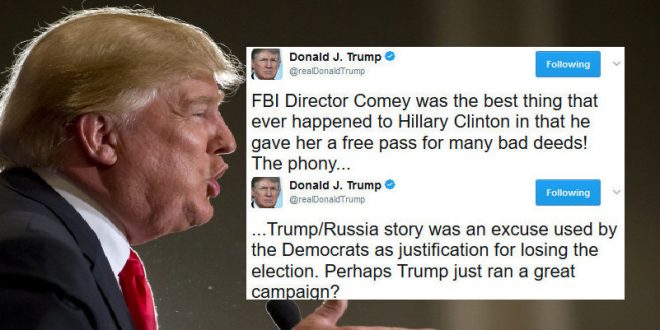 You knew Trump wouldn’t be able to resist blowing up at Hillary Clinton over yesterday’s election. The Washington Post reports:

In a thought spanning two tweets, sent 15 minutes apart, Trump claimed Comey actually helped Clinton during the election and said Democrats used Russian hackers as a scapegoat for their loss. A president implicitly lashing out at his own FBI director in a tweet, or in any other medium, is a bit unusual.

But it isn’t surprising to see Trump tweeting about Clinton. He’s done so at least twenty times since defeating her in the 2016 presidential election. Most of these tweets mention his victory and either disparage Clinton or glorify himself or both.

FBI Director Comey was the best thing that ever happened to Hillary Clinton in that he gave her a free pass for many bad deeds! The phony…

…Trump/Russia story was an excuse used by the Democrats as justification for losing the election. Perhaps Trump just ran a great campaign?