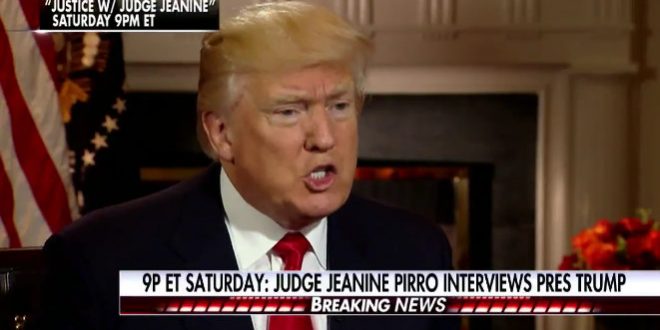 Fox News this afternoon released a portion of an interview Trump has done with nutcase Jeanine Pirro in which he doubles down on this morning’s tweeted threat to pull back on press briefings. Not only that, Trump wouldn’t commit to keeping Spicey around much longer. Via Mediaite:

“Is Spicer your press secretary today and tomorrow?” Pirro asked. “Will he be tomorrow?” “He’s doing a good job, but he gets beat up,” the president responded. When pressed by Pirro on whether he’ll be there the following day, Trump merely noted that Spicer’s “been there since the beginning.”

It was reported earlier this week that White House Deputy Press Secretary Sarah Huckabee Sanders was being “evaluated” when she took over for Spicer this week at the podium, suggesting that Trump could be looking to make a switch.

This all comes on the heels of reports that the president was extremely angry over the way his communications team handled the news of his firing FBI Director James Comey, even though he gave them very little forewarning.