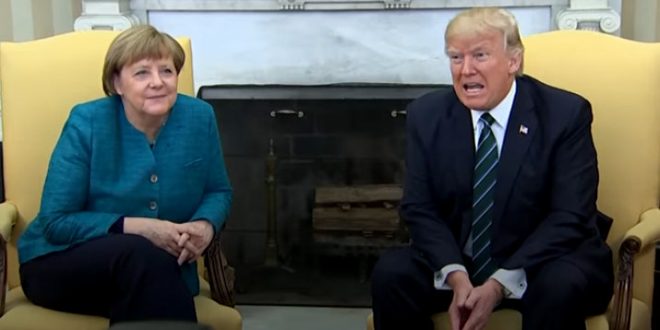 Trump In Brussels: Germans Are Very Evil, They Sell Millions Of Cars In America And I’m Going To Stop That

President Donald Trump is ready to fight Germany in an auto battle according to Germany’s Der Spiegel. Trump got a chilly reception at the NATO summit in Belgium after attacking fellow members.

But he was caught pledging a battle with German automakers as part of his anger with “back dues” he feels the country owes to NATO. As CNN’s Jake Tapper noted, “Trump seems to think it’s like a country club.”

In a discussion about the country’s trade surplus, Trump said “The Germans are evil, very evil.” “Look at the millions of cars they sell in the US, and we’ll stop that,” sources told Der Spiegel. According to the report, EU Commissioner Jean-Claude Juncker took up for Germany explaining that “free trade is good for all.”

Germans are "bad, very bad" or "evil, very evil," depending on translation of what Trump reportedly told EU leaders https://t.co/xQN0BqEtkB

Trump says the Germans are evil and bad three days after holding an orb ceremony with the king of Saudi Arabia. Fuck this.

at meeting with EU, Trump called Germans 'evil' and appeared not to know, among other things, that EU negotiates trade agreements as a bloc https://t.co/u0jUGuo9BD

Trump told EU leaders in Brussels he would stop German cars exports to the United States and Germany was "very bad." https://t.co/UhDXHBLtDi

German car makers build LOTS of cars in the U.S. Trump has even been invited to visit 1 of those plants in SC by the CEO of BMW. https://t.co/XqGcGg7Zxh