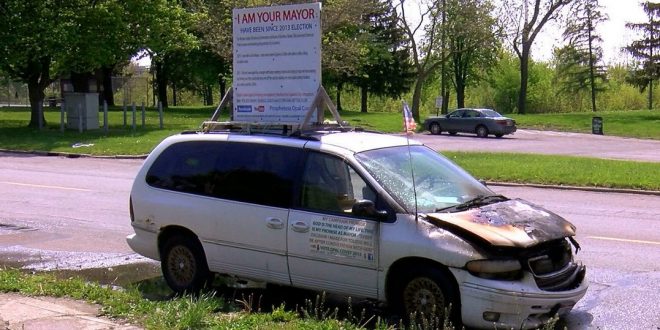 A few years ago “prophetess” Opal Covey, Toledo’s tongues-speaking perennial mayoral candidate, warned that God would rain fire down on the city if she wasn’t elected. So this just happened:

Opal Covey’s now famous campaign van caught fire on Navarre Avenue in east Toledo. She says the motor shut down as she was driving. When she tried to restart the van, the fire sparked. “And then all of a sudden somebody stopped across the street and said get out it’s on fire! And that’s the first time that I realized it,” Covey said. “I wasn’t shaking or nothing, but I went back and got my purse and had my sister in the car and we both got out safely.” The large campaign sign on the top of the van was not damaged.