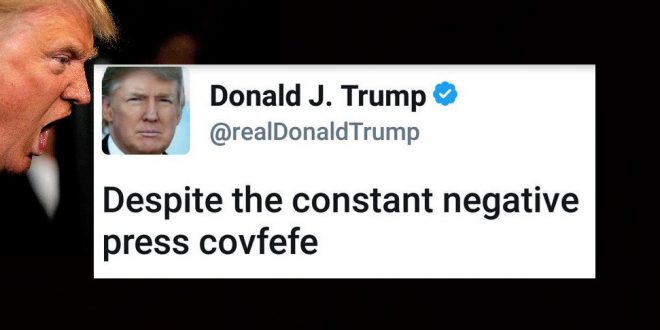 Today We All All Covfefe Muchly

And on the 132nd day, just after midnight, President Trump had at last delivered the nation to something approaching unity — in bewilderment, if nothing else. The state of our union was … covfefe. The trouble began, as it so often does, on Twitter, in the early minutes of Wednesday morning. Mr. Trump had something to say. Kind of.

“Despite the constant negative press covfefe,” the tweet began, at 12:06 a.m., from @realDonaldTrump, the irrepressible internal monologue of his presidency. And that was that. A minute passed. Then another. Then five. Surely he would delete the message. Ten. Twenty. It was nearly 12:30 a.m.

Forty minutes. An hour. The questions mounted. Had the president’s lawyers, so eager to curb his stream-of-consciousness missives, tackled the commander in chief under the cover of night? Perhaps, some worried aloud, Mr. Trump had experienced a medical episode a quarter of the way through his 140 characters.

No one at the White House could immediately be reached for comment. By 1 a.m., the debate had effectively consumed Twitter — or at least a certain segment of insomniac Beltway types, often journalists and political operatives — ascending the list of trending topics.

When you sleep through a meme lifecycle but luckily one of your lawyers is on it. #covfefe https://t.co/dxf2heTkOk

"And just before you serve it, you hit it with a dash of #Covfefe" pic.twitter.com/fm9CAF4Iyz

Previous Trump Again Rants In Reaction To Fox & Friends
Next BREAKING: Trump To Pull Out Of Paris Climate Accord