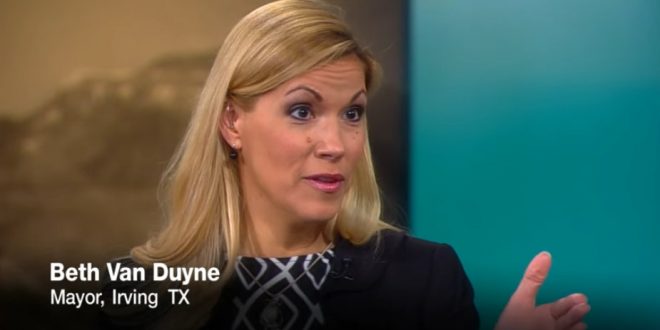 Beth Van Duyne is leaving the Irving mayor’s office to become a U.S. Housing and Urban Development regional administrator overseeing Texas and its four surrounding states. Van Duyne, whose new post became official Monday, had been in talks since November with President Donald Trump’s administration and other Republicans about a federal government role. She said much of HUD’s mission overlaps with work that mayors do. She added that helping the most vulnerable is what attracted her to being mayor, a job she’s held since 2011.

“I strongly believe that government should be limited and that it should be focused on helping those that need it the most,” Van Duyne said Monday from her HUD office in downtown Fort Worth. For more than a decade on the Irving City Council, Van Duyne made a name for herself with her vocal stances on illegal immigration, government spending and accountability, and Sharia. Van Duyne met with her HUD staff Monday morning. She told The Texas Tribune she’s “still absorbing as much information as possible” about the department’s numerous programs and mission.

Right Wing Watch reminds us why her name might seen familiar:

In 2015 Van Duyne received national attention for falsely claiming that a Sharia law court had been established in the town where she served as mayor, a myth the Houston Chronicle called the “2015 Texas Hoax of the Year.”

In the incident, Van Duyne attacked a religious mediation panel led by Muslims—similar panels are led by Christian, Jewish and other religious groups— as a “Sharia Law Court” and warned that the tribunal designed to resolve certain disputes could impose non-American laws, despite the fact that the tribunal’s “proceedings must be conducted in accordance with the law of the land; local, state and federal within the United States.”

Michael Flynn, President Trump’s former national security adviser and an anti-Muslim conspiracy theorist in his own right, praised Van Duyne for her stand against the nonexistent Sharia law court in a visit it to Texas: “Beth is incredibly brave. Vote for her for anything.”