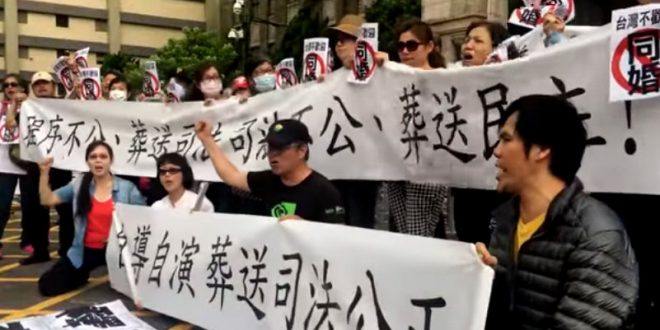 On Wednesday afternoon, cheers rang out in the streets of Taipei as Taiwan’s top constitutional court ruled in favor of same-sex marriage, but not everyone present was so overjoyed. The ruling has left anti-gay groups on the island in shock, with one prominent activist likening the decision to the September 11th terror attacks of 2001.

Shih Chun-yu, a student at Fu Jen Catholic University in New Taipei City who heads the Protection of Family Value Students Organization, bowed to supporters following the announcement, apologizing, “We did not work hard enough, we have failed. This ruling will destroy the foundation of the family and marriage in Taiwan, just like the Twin Towers were destroyed in the 9/11 attacks.”

As Taiwan seemed on the verge of marriage equality in recent months, anti-gay groups mobilized and took to the streets, holding massive demonstrations across Taiwan and launching a publicity campaign that attempted to link same-sex marriage to incest, bestiality and AIDS. The Washington Post notes that one religious group even warned that the legalization of gay marriage would mean that “it’s possible to marry a Ferris wheel.”

There’s much more wailing assholery at the link, including many photos.

Taiwan has just become the first place in Asia to allow same-sex marriage! Welcome to the right side of history!! ❤️💛💚💙💜 pic.twitter.com/92YnzHw4uC