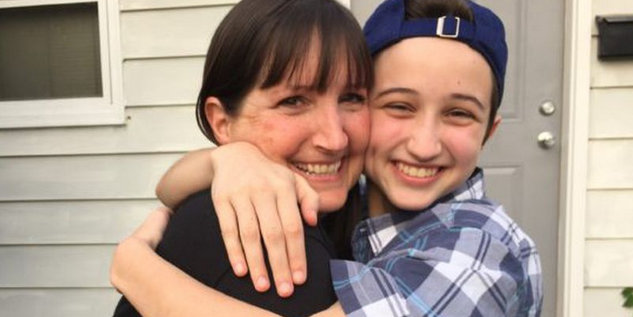 A single student’s case has turned into a massive legal decision for all transgender Americans. On Tuesday, the Seventh Circuit Court of Appeals ruled that the Kenosha Unified School District in Wisconsin violated the rights of a trans student, Ash Whitaker [photo, with his mother], when it refused to let him use the boys’ bathroom.

According to the court, Whitaker is likely to win upon a full review of the case (instead of the current review of a lower court’s preliminary injunction) on his claim that the school’s actions violated Title IX, a federal law that prohibits discrimination in schools based on sex, and the Equal Protections Clause of the 14th Amendment. So it upheld a lower court’s injunction forcing the school to let Whitaker use the bathroom that aligns with his gender identity.

In the decision, a three-judge panel from the Seventh Circuit Court concluded that the school district “has failed to provide any evidence of how the preliminary injunction will harm it, or any of its students or parents” — a rebuke of the prevalent myth that letting trans people use the bathroom for their gender identity will hurt others.

From the Transgender Law Center:

With this decision, the Seventh Circuit (which covers Wisconsin, Illinois, and Indiana) is the first federal appeals court to find conclusively that a transgender student has the right to be treated in accordance with the student’s gender identity at school under both Title IX and the Constitution. Notably, it is also the first decision to reach that conclusion without reliance on the Obama Administration’s guidance on schools’ Title IX obligations to transgender students, which the Trump Administration rescinded in February.

“I am thrilled that the Seventh Circuit recognized my right to be treated as the boy that I am at school,” said Ash. “After facing daily humiliation at school last year from being threatened with discipline and being constantly monitored by school staff just to use the bathroom, the district court’s injunction in September allowed me to be a typical senior in high school and to focus on my classes, after-school activities, applying to college, and building lasting friendships.

“As I look forward to college next year, I hope my case will help other transgender students in Kenosha and elsewhere to just be treated the same as everyone else without facing discrimination and harassment from school administrators.”

Earlier this year, the Supreme Court returned a similar case back to the Fourth Circuit appeals court for further consideration in light of the government’s rescission of that Title IX guidance. In that case, G.G. v. Gloucester County School Board, the Fourth Circuit had relied on the guidance to find that a school district violated Title IX by excluding Gavin Grimm, a transgender boy, from boys’ restrooms at his Virginia high school. Today, the Seventh Circuit found that, even absent guidance from the federal government, “[a] policy that requires an individual to use a bathroom that does not conform with his or her gender identity punishes that individual for his or her gender nonconformance, which in turn violates Title IX.”