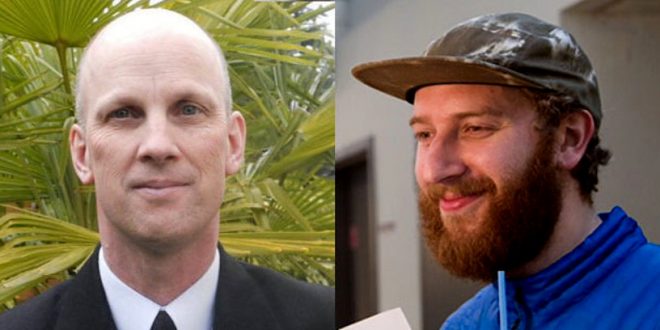 SAY THEIR NAMES: Dan Rather Calls On Trump To Recognize Oregon Men Murdered By White Supremacist

Last night veteran newsman Dan Rather called on Trump to publicly recognize the two Oregon men who were stabbed to death by a white supremacist after they stepped in to defend two Muslim girls from his screaming tirade. Rather writes:

Dear President Trump, Their names were Taliesin Myrddin Namkai-Meche and Ricky John Best. One was a recent college graduate. The other was an army veteran and father of four. I wish we would hear you say these names, or even just tweet them. They were brave Americans who died at the hands of someone who, when all the facts are collected, we may have every right to call a terrorist. A third brave man, Micah David-Cole Fletcher, was wounded in the knife attack.

This story may not neatly fit into a narrative you pushed on the campaign trail and that has followed you into the White House. They were not killed by an undocumented immigrant or a “radical Islamic terrorist.” They were killed in an act of civic love, facing down a man allegedly spewing hate speech directed at two teenage girls, one of whom was wearing a hijab. That man seems to have a public record of “extremist ideology” – a term issued by the Portland Police Bureau.

This “extremism” may be of a different type than gets most of your attention, or even the attention in the press. But that doesn’t make it any less serious, or deadly. And this kind of “extremism” is on the rise, especially in the wake of your political ascendency. Most people who study these sorts of things do not think that is a coincidence. I do not blame you directly for this incident. Nor do I think other people should. But what a President says, who he has around him, and the tone he sets can set the tone for the nation at large.

Perhaps Portland, Oregon is off your radar. It is, after all, a rather liberal place. It’s even a “sanctuary city.” But it is still an American city. And you are its President. Two Americans have died leaving family and friends behind. They are mourned by millions more who are also deeply worried about what might come next. I hope you can find it worthy of your time to take notice.

Online fundraisers for the victims’ families have raised nearly $800,000 in two days.