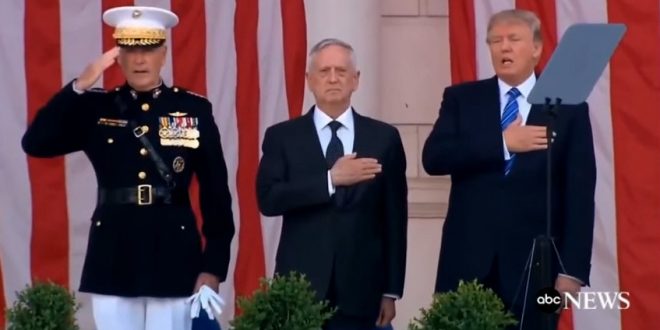 But first a report from AOL News:

President Donald Trump joined Vice President Pence, Gen. James Mattis among other leaders at the Tomb of the Unknown Soldier on Memorial Day, where he paid a solemn tribute to the lost soldiers and participated in a wreath-laying ceremony.

And during the festivities, the president sang along to the “Star-Spangled Banner” during the opening of the ceremony — a portion of the event which has since been picked apart by Twitter upon its debut. Trump’s voice could not be heard over the orchestra, but that has not stopped tweeters who were less than amused with the president’s demeanor during the somber event.

“Trump theatrically singing the national anthem like a 1st grader while Mattis looks like he’s about to cry … in rage and disgust,” one person tweeted while another wrote, “He was dancing and singing to himself. It was a show about Trump. He looked like an idiot.”