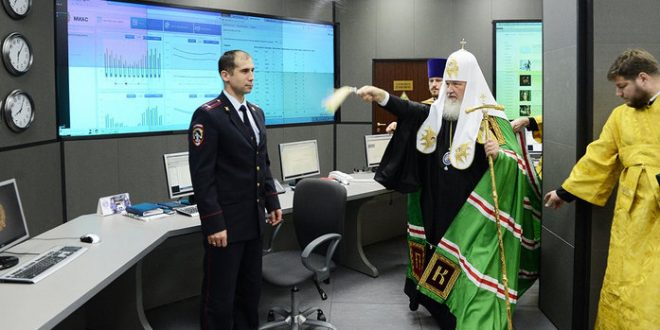 Over the weekend, the WannaCry ransomware attack targeted Microsoft Windows systems across the globe, even disrupting hospitals in Britain. But Russia won’t have to worry about anything like that happening because the Orthodox Church’s Patriarch Kirill apparently visited the Ministry of Internal Affairs and sprayed holy water on the computers.

They can hack our political campaigns, but they think spraying water on computers is a smart move… #Logic. It won’t do any good, obviously, and I suspect the government let Kirill work his magic because he’s a powerful figure in the country. I think the government official standing in the middle of the room with the “you’ve got to be kidding me” look speaks for all of us.

Kirill is the de facto leader of Russia’s anti-LGBT movement and has denounced same-sex marriage as a sign of the apocalypse. Five years ago he earned worldwide ridicule after his church photoshopped his $30,000 watch out of an official photo. (Tipped by Christian Nightmares)

Patriarch of Russian Orthodox church making sure that the Ministry of Internal Affairs computers won’t get affected by WannaCry virus attack pic.twitter.com/m2S7rP2iHU