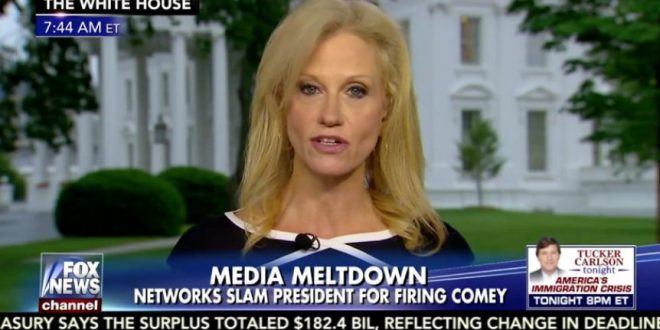 Propaganda Minister Conway: It Was Totally Sexist For Anderson Cooper To Roll His Eyes At Me [VIDEO]

Conway responded to the eye-roll on Thursday during an appearance on Fox & Friends. And naturally, she linked it to sexism. “Hillary Clinton is in search of sexism as a lame excuse for why her disastrous candidacy and campaign lost six months ago,” she said. “[But] I face sexism a lot of times when I show up for interviews like that.” She went on, “Could you imagine…having a male anchor on the network roll eyes at Hillary Clinton [or at] a female spokeswoman for President Obama or President Bill Clinton? I think not.”

As you’ll see below, shrieking homocon radio host Tammy Bruce has a problem with it too.

.@HeyTammyBruce calls out Anderson Cooper for eyeroll at Kellyanne Conway: “He just reduced himself to being a child” pic.twitter.com/XQYvy5dXDp

So here’s a gif of Anderson Cooper eyerolling at Kellyanne Conway pic.twitter.com/HT0Q1oTDV4

Previous Dwayne Johnson: I Might Run For President
Next STUDY: Life Expectancy Now Near Normal For Young HIV Patients On The Latest Antiretroviral Therapies