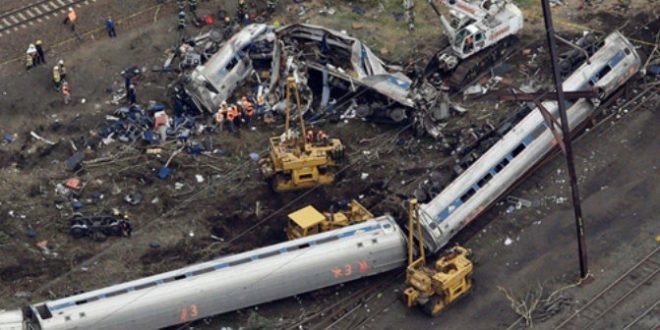 The state’s top prosecutor on Friday charged a speeding Amtrak engineer with causing a catastrophe, involuntary manslaughter and other crimes in a deadly 2015 derailment that came after he accelerated to 106 mph on a 50 mph curve. Prosecutors said they were in talks with engineer Brandon Bostian’s attorney to have him surrender on the charges.

The judge had signed off on two misdemeanor charges over Rachel Jacobs’ death in the May 12, 2015, derailment. Shapiro approved a felony charge of risking or causing a catastrophe and a string of misdemeanors, including eight counts of involuntary manslaughter and reckless endangerment.

Shortly after the crash, right wing troll Chuck C. Johnson outed Bostian as a gay “tranny supporter” and posted nude photos allegedly found in a hook-up site profile. (Johnson has been permanently banned from Twitter for doxxing rape victims.) Multiple crackpots including the AFA’s Sandy Rios leapt upon Johnson’s claims and declared that Bostian’s sexuality played a role in the crash. World Net Daily bizarrely declared Bostian to be a “well-known gay activist.” The NTSB has ruled that Bostian was not on drunk or on drugs at the time of the crash and was not on his phone.