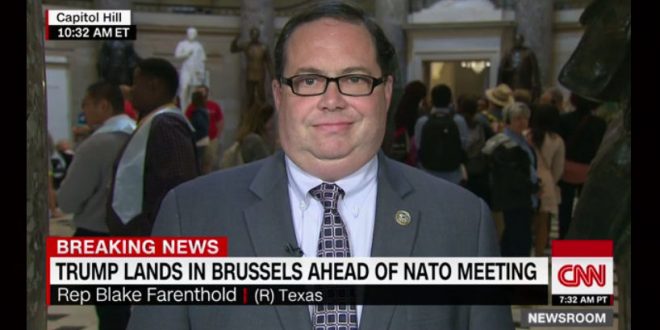 Texas Rep. Blake Farenthold, during an appearance on CNN Wednesday morning, offered what seemed to be a wink and nod to the debunked conspiracy theories surrounding the murder of former Democratic National Committee staffer Seth Rich. Here’s the exchange with CNN’s Poppy Harlow and John Berman:

FARENTHOLD: “My fear is our constant focusing on the Russians is deflecting away for some other things that we need to be investigating. There’s still some question as to whether the intrusion of the DNC server was an insider job or whether or not it was the Russians.”

BERMAN: “What evidence — I’m sorry. I’m sorry. The insider job, what are you referring to here? Because I hope it’s not this information that Fox News just refused to be reporting.”

BERMAN: “What’s circulating on the internet that you think is worthy of a congressional investigation? Because the DC police are investigating this, and so far they haven’t said there’s any there there.”

@DavidWright_CNN @farenthold "Stuff circulating on the internet." like @farenthold being a pervert pic.twitter.com/z34FFuP7Uh

Previous Trump Vowed To Give US Treasury All His Profits From Foreign Governments So Of Course He Isn’t Doing That
Next Game Of Thrones Author: Joffrey Is Now America’s King