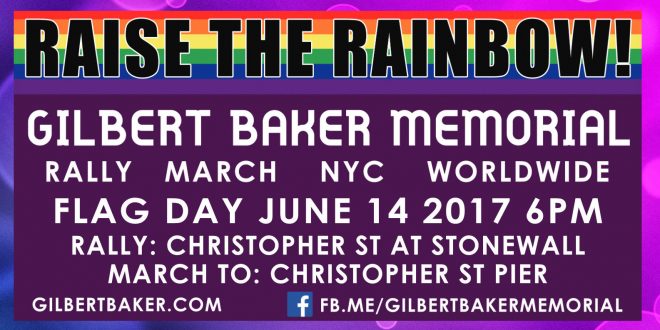 Friends and family of the late Gilbert Baker will hold an activist march and rally against LGBT oppression in memory of the world-renowned artist who created The Rainbow Flag, the international symbol of LGBT pride and liberation.

Baker, a lifelong LGBT and social justice activist, died suddenly March 31 in his Manhattan home. He was 65. The political march and rally “Raise the Rainbow!” will take place, appropriately, on Flag Day, which is Wednesday, June 14, from 6:00 to 9:00pm. “Raise the Rainbow!” is a public event open to all.

Attendees are invited to bring their own rainbow-themed banners, art pieces and protest signs. The event begins at 6:00pm with a rally at the Stonewall Inn, the bar whose 1969 riots sparked the modern LGBT movement.

A celebration of Gilbert Baker in San Francisco, his home for decades and the site of the creation of the Rainbow Flag in 1978, will happen Thursday, June 8, at 7:00pm at the Castro Theatre, 429 Castro Street, San Francisco, CA 94114. People globally are urged to hold their own protests and memorials.