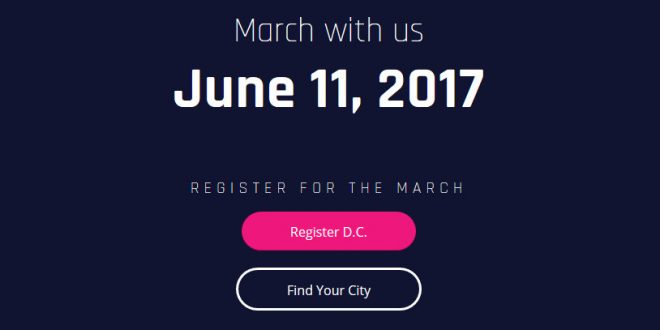 The website for the National Equality March went live last night with a listing of nearly 40 sister marches. They write:

The “Equality March for Unity & Pride” is a grassroots movement which will mobilize the diverse LGBTQ+ communities to peacefully and clearly address concerns about the current political landscapes and how it is contributing to the persecution and discrimination of LGBTQ+ individuals.

Progress has been made over the past decade in the ongoing fight for LGBTQ+ inclusion, access, and justice, but there’s still so much more to be done – especially since the progress we’ve achieved is currently being threatened by increased hostile rhetoric, discriminatory policies, and violence perpetrated against the most vulnerable in our communities.

We will use the Equality March, and sister events across the country, to give voice to our concerns, and to support, uplift, and bring attention to those in our communities who are targeted due to immigration status, ethnicity, religion, skin color, gender, and disability.

We affirm and celebrate that we are a mix of diverse communities. Lack of unity has caused many of our needs to be neglected or ignored. But now, for 2017 and beyond, we are working to learn from our prior mistakes and come together through common belief in inalienable human rights and dignity for all.