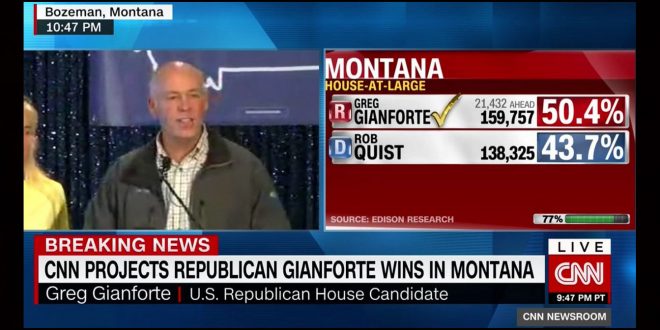 Republican Greg Gianforte has won the special election for Montana’s open US House seat, CNN projects, defeating Democrat Rob Quist and capping off a whirlwind final 36 hours of the campaign that saw Gianforte being charged for allegedly assaulting a reporter.

Gianforte was considered the favorite heading into Thursday’s election to fill the seat once held by Interior Secretary Ryan Zinke, but that was before he allegedly “body-slammed” a reporter during his final campaign event in Bozeman on Wednesday.

The crowd started laughing when Gianforte mentioned the assault — 60 seconds later, it’s applauding as he apologizes.

Gianforte apologizes: "i'm not proud of what happened. i should not have responded in the way that i did, and for that i'm sorry."

Greg Gianforte apologizes after winning AND after standing behind lie until vote was tallied. So sick of bullshit "manning up" nonsense

Greg Gianforte, in victory speech, apologies to @Bencjacobs for assault incident. "I should not have treated that reporter the way I did"