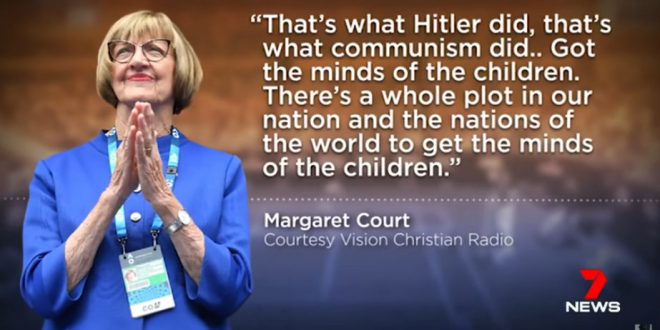 Margaret Court: Gays Are Like Hitler, Trans Kids Are Possessed By Satan, And Tennis Is Full Of Lesbians

Margaret Court has reaffirmed her opposition to homosexuality, telling a Christian radio station that tennis is “full of lesbians”. Speaking to 20Twenty Vision Christian radio host Neil Johnson on Monday, Court said when she was on the professional tennis tour lesbian players would try to influence younger players.

“When I was playing there was only a couple there, but those couple that led that took young ones into parties and, things…because they like to be around heroes,” she said. “And you know, what you get at the top is often what you’ll get right through that sport.”

The champion tennis player entered the public debate on homosexuality last week when she wrote a letter to The West Australian saying she would no longer travel with Qantas because of the airline’s support of same sex marriage.

When asked a question on same-sex marriage, Court compared homosexual rights activists to Hitler and said children who identified as transgender were being influenced by the Devil. “That’s all the Devil . . . but that’s what Hitler did and that’s what communism did – got the mind of the children. And there’s a whole plot in our nation, and in the nations of the world to get the minds of the children.”