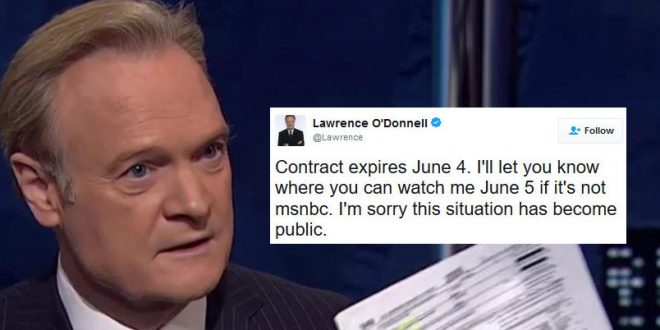 After weeks of rumors, this morning MSNBC host Lawrence O’Donnell acknowledged that his contract with the network may not be renewed. But O’Donnell might not be the only one departing. Via Mediaite:

The air is thick with MSNBC intrigue: amidst a week of rumors that primetime host Lawrence O’Donnell’s days at the network are numbered, a Daily Beast report says the network’s longtime president Phil Griffin could follow him out the door. Griffin has been president of the network since 2008, and is responsible for a number of its stars: he plucked Rachel Maddow from radio obscurity and pushed her into primetime, gave Chris Hayes his 8 p.m. slot, put O’Donnell on at 10 p.m. and green lit Morning Joe. MSNBC has seen its ratings soar since the 2016 election, with its progressive primetime lineup rivaling Fox News’ usual dominance of cable news.

Last night Rachel Maddow ended her show with a segue into a warm chat with O’Donnell that most took as an open statement of support. MSNBC is owned by Comcast and there’s been much talk that NBC News chairman Andy Lack intends to push the network to the right.

Contract expires June 4. I’ll let you know where you can watch me June 5 if it’s not msnbc. I’m sorry this situation has become public. https://t.co/bS8V8GXbZ1