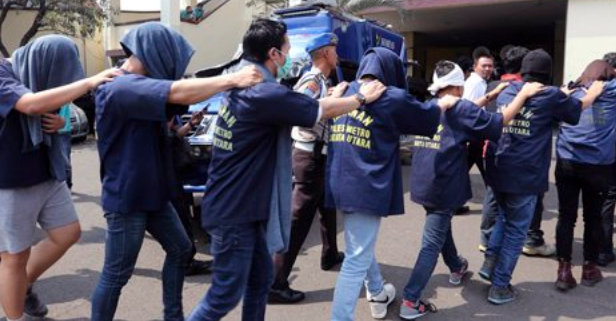 Indonesian police detained dozens of men including several foreigners in a weekend raid on a gay sauna in the capital, another sign of growing hostility to homosexuality in the world’s most populous Muslim nation. Police spokesman Argo Yuwono said 141 men were detained for questioning in the raid Sunday evening on the gym and sauna in north Jakarta. Police say the sauna was the venue for a sex party promoted as “The Wild One.”

Homosexuality is not illegal in Indonesia, but police said the country’s pornography laws had been violated. Ten people will be charged, police said, including the sauna’s owner, several staff including strippers, a gym trainer, receptionist and security guard, and two visitors to the club who allegedly performed oral sex. If found guilty, they face penalties of up to 10 years in prison and fines.

Last week, a Shariah court in the conservative province of Aceh sentenced two men to public caning for gay sex. Vigilantes broke into the couple’s rented accommodation to film them having sex and handed them over to Shariah police. The court sentenced the men, aged 20 and 23, to 85 lashes each, sparking condemnation from rights groups. Aceh is the only province in Indonesia to practice Shariah law, though some areas have adopted Shariah-style bylaws.

Previous Son Of Roger Ailes Vows Revenge On His Late Father’s Sexual Harassment Accusers: “Hell Is Coming With Me”
Next So This Happened Yesterday In Saudi Arabia…