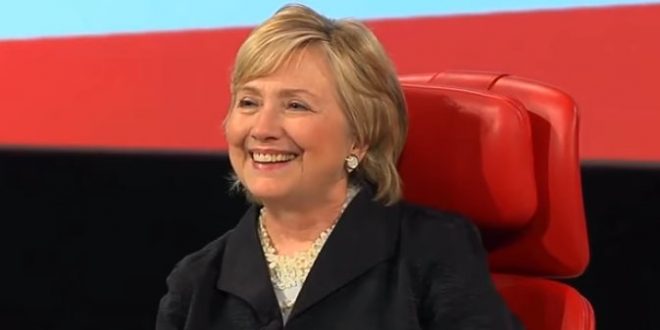 Hillary Clinton came prepared with more than one zinger about the mystery word of the day: Covfefe. At an interview hosted by Recode on Wednesday, one of the moderators brought up covfefe — a word that took on a life of its own after Trump tweeted a few minutes after midnight: “Despite the constant negative press covfefe.” (The tweet has since been deleted). “I thought it was a hidden message to the Russians,” Clinton said, to laughter from the audience.

Clinton didn’t stop there. Later in the event, when an audience member again mentioned covfefe, Clinton mocked White House spokesman Sean Spicer’s explanation from earlier in the day. Spicer had said that only Trump and a small number of people knew the meaning of the word. “Ah, the small group explanation,” Clinton said. “You don’t have a high enough classification to know what covfefe means.”

Previous GOP US House Rep. Tim Walberg: If Climate Change Turns Out To Be “Real Problem,” God Will Fix It [VIDEO]
Next Erick Erickson: I Worship Jesus So Screw The Climate