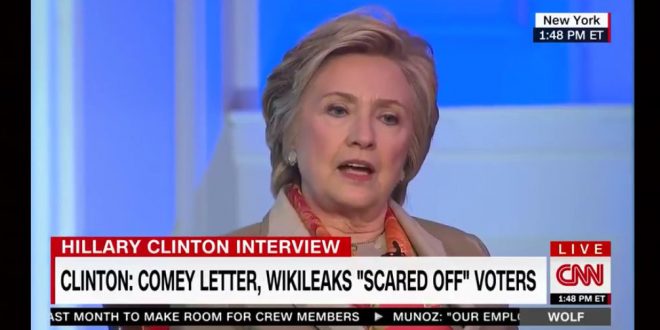 Hillary Clinton: I Was On The Way To Winning Until James Comey’s Letter and “Russian Wikileaks” [VIDEO]

Hillary Clinton told CNN’s Christiane Amanpour during a women’s event on Tuesday that she believes she was “on the way to winning” the 2016 presidential election until the FBI announced 11 days before the election that it was revisiting the investigation into her emails.

The former Secretary of State said that while she takes “absolute personal responsibility” for her defeat, “a combination of [FBI Director] Jim Comey’s letter on October 28 and Russian Wikileaks raised doubts in the minds of people who were inclined to vote for me and got scared off.”

“The evidence” that those two “intervening events” were carried out to harm her candidacy is “compelling and persuasive,” Clinton told Amanpour on Tuesday. But she said she is “proud” of her campaign for overcoming an “enormous barrage of negativity, of false equivalence, of so much else.”

Clinton also described herself as now part of the “resistance.”