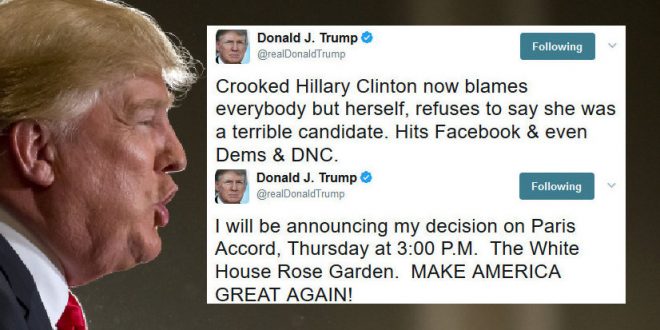 President Donald Trump is accusing his former rival Hillary Clinton of blaming everyone but herself for her election loss. Trump revived an old nickname for the Democrat Wednesday, tweeting that, “Crooked Hillary Clinton now blames everybody but herself, refuses to say she was a terrible candidate.” Trump was likely responding to Clinton’s appearance Wednesday at Recode’s Code conference in California, where she discussed the 2016 presidential campaign at length.

And from The Hill:

President Trump will announce his decision on whether the U.S. will remain in the Paris climate change agreement on Thursday at 3 p.m., he tweeted Wednesday. Trump is pulling the U.S. from the climate deal, according to several reports that came out on Wednesday. Axios first reported that Trump is finalizing a strategy for pulling out from the agreement with EPA director Scott Pruitt before making the announcement.

Crooked Hillary Clinton now blames everybody but herself, refuses to say she was a terrible candidate. Hits Facebook & even Dems & DNC.

She left out the part where you sold this country out to the Russians, traitor. https://t.co/BqqAZHjOn9

This from a guy who can't even admit he made a typo and actually sent his press secretary to say that he meant to type "covfefe" https://t.co/XLg7QZ9pNr