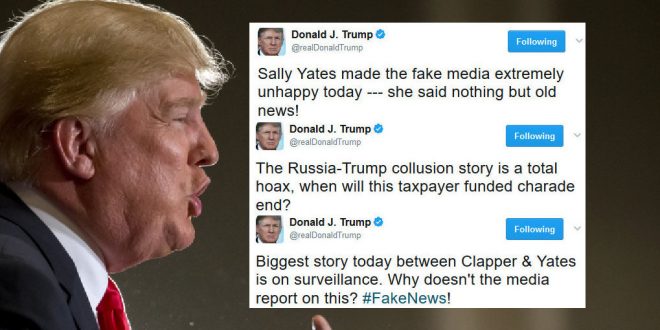 In the wake of long-awaited testimony from former acting Attorney General Sally Yates and former Director of National Intelligence James Clapper, President Donald Trump claimed on Monday that neither had anything new to say.

Yates made headlines by testifying that she warned the White House that Trump’s former national security adviser Michael Flynn could be “compromised with respect to the Russians” as a result of his “underlying conduct.”

She also testified that some lawyers in her department were told not to inform her about Trump’s original executive order barring immigrants from seven Muslim-majority countries until it was implemented.

For an in-depth analysis of today’s hearing, read this excellent Mother Jones story.

Director Clapper reiterated what everybody, including the fake media already knows- there is "no evidence" of collusion w/ Russia and Trump.

Sally Yates made the fake media extremely unhappy today — she said nothing but old news!

The Russia-Trump collusion story is a total hoax, when will this taxpayer funded charade end?

Biggest story today between Clapper & Yates is on surveillance. Why doesn't the media report on this? #FakeNews!