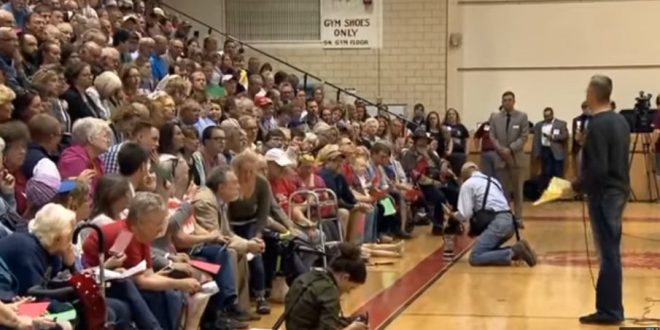 An Iowa congressman walked out of a television interview on Monday, declining to explain why his staff is prescreening constituents who plan to attend his town hall meetings this week. A few hours later, Rep. Rod Blum (R-Iowa) showed up at his town hall meeting where most of the prescreened audience screamed at him.

It was a rough start to a recess week for Blum, a second-term lawmaker representing a swing district that voted narrowly for President Trump last year after supporting Barack Obama in 2012. Blum is a member of the conservative House Freedom Caucus who initially declined to support the Republican plan to replace the Affordable Care Act but ultimately voted last week for the American Health Care Act.

The way Blum struggled Monday night to explain his vote — through the loud boos of rowdy, impolite and infuriated constituents — is just a narrow sampling of the the growing concern and confusion caused by Republican plans to revamp the nation’s health-care system. But it indicates the difficult balancing act many Republican lawmakers from swing districts will need to strike as the complex debate continues in Washington.