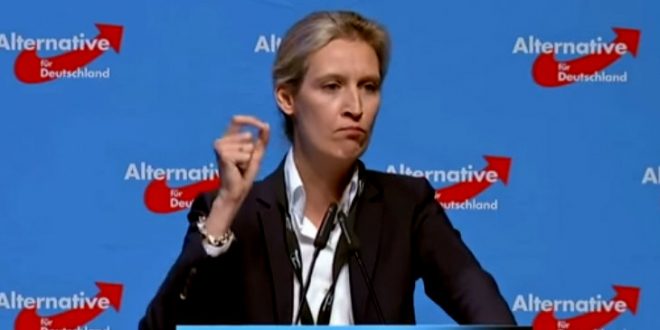 Ask most people to picture a German right-wing populist, and their mental image would probably not be one of a much-traveled, multilingual consultant to startups. Still less an openly gay woman with two children in a same-sex union. But then, if the last two years have taught the world anything, it’s not to be surprised by paradoxes such as Alice Weidel.

Weidel is the new face of the Alternative für Deutschland, the right-wing movement that flourished in the backlash to the 2015 migrant crisis, when Angela Merkel opened the borders to over 1 million asylum-seekers and other migrants. When Germans vote for a new Bundestag in September, Weidel will—at least notionally—be the AfD’s candidate to replace Merkel as chancellor.

The common assumption is that a well-educated, well turned-out, high-earning and articulate young woman living an alternative domestic life (she raises two children with her partner, a Swiss film producer) will make it easier for more Germans to identify with the AfD. And in an interview with the Financial Times, published Friday, she was quick to stress the point, arguing: “The fact that I was elected top candidate shows how tolerant it is.”

Fortune goes on to note that photos of Weidel’s family are “completely absent” from her website. From from Britain’s Express:

Dr Weidel, citing President Donald Trump, claimed the German Chancellor was insane for her open door immigration policy. She said: “Since September 2015, we have had a policy of open borders without legal basis. “The country will be destroyed through this immigration policy. Donald Trump said that Merkel is insane and I absolutely agree with that. It is a completely nonsensical form of politics that is being followed here.” Dr Weidel added that open borders should have been an “exceptional circumstance” for an “emergency”, not the 18 months the German Chancellor had allowed.