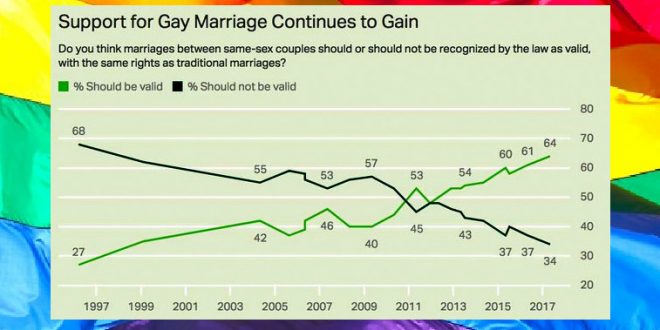 Sixty-four percent of U.S. adults say same-sex marriages should be recognized by the law as valid. Although not meaningfully different from the 61% last year, this is the highest percentage to date and continues the generally steady rise since Gallup’s trend began in 1996. The latest update, from Gallup’s annual Values and Beliefs poll conducted May 3-7, comes nearly two years after the Supreme Court ruled that states could not prohibit same-sex marriage.

Americans’ support for same-sex marriage has more than doubled since Gallup first polled on the issue in 1996, when 27% said it should be recognized as valid by the law. In 2004 — weeks before gay weddings took place in Massachusetts after it became the first state to legalize same-sex marriage — less than half of Americans (42%) felt such unions should be legally valid.

Majority support for gay marriage would not come until May 2011, about a month before New York became the sixth state to legalize it. Since then, support for legal same-sex marriage has steadily climbed, with consistent majorities in favor of it since late 2012.

Previous John Olivers Rants On Trump/Comey/Russia [VIDEO]
Next Chris Cuomo: Nobody In The Republican Leadership Will Appear On CNN To Defend James Comey’s Firing