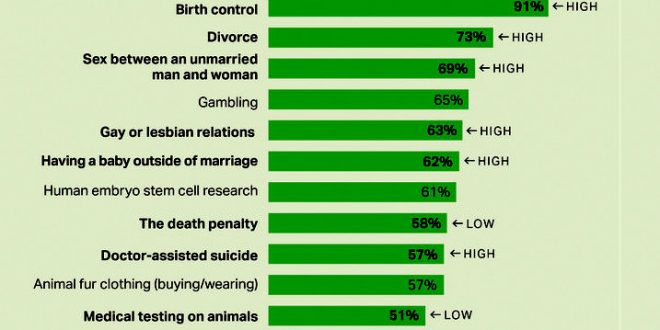 Americans continue to express an increasingly liberal outlook on what is morally acceptable, as their views on 10 of 19 moral issues that Gallup measures are the most left-leaning or permissive they have been to date.

The percentages of U.S. adults who believe birth control, divorce, sex between unmarried people, gay or lesbian relations, having a baby outside of marriage, doctor-assisted suicide, pornography and polygamy are morally acceptable practices have tied record highs or set new ones this year. At the same time, record lows say the death penalty and medical testing on animals are morally acceptable.

Of the 19 issues included in this year’s poll, 13 show meaningful change in a liberal direction over time, regardless of whether they are currently at their high point in Gallup’s trend. No issues show meaningful change toward more traditionally conservative positions compared with when Gallup first measured them. That leaves six issues for which there has essentially been no change over time.