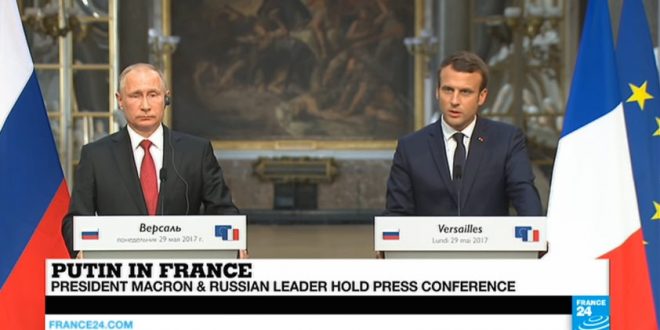 France’s newly elected president, Emmanuel Macron, came out of his first meeting with President Vladimir V. Putin of Russia on Monday with a message of stark challenge, promising French military reprisals for any use of chemical weapons by Russia’s allies in Syria and saying he would closely monitor the curtailing of civil rights for gay people in Chechnya.

On human rights, Mr. Macron said he had raised the troubles facing gay and transgender people in Chechnya as well as those of nongovernmental organizations. Mr. Macron said that he had discussed the reports of collective punishment of gay men in Chechnya with Mr. Putin and that they had agreed on a “very regular monitoring” of the situation.

Mr. Macron said Mr. Putin had told him he had taken measures to “establish the complete truth on the activities of local authorities” in Chechnya, but he did not specify what those measures were. Chechnya is under the control of a pro-Kremlin leader, Ramzan A. Kadyrov.

“As for me, I will be constantly vigilant on these issues, which are in keeping with our values,” Mr. Macron said. Although he did not dispute Mr. Macron’s characterization, Mr. Putin did not mention gay people during the news conference.