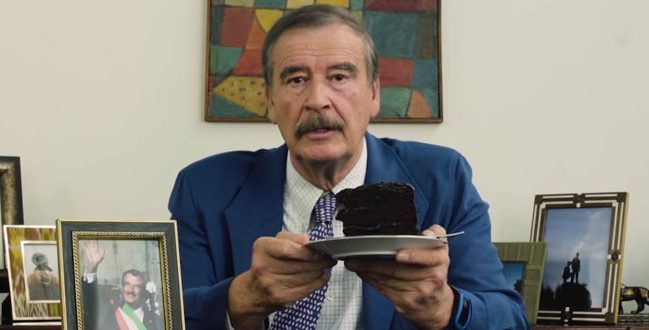 SNAP: Former Mexican President Trolls Trump, “Here’s Something For The Bees Living In Your Brain” [VIDEO]

Former Mexican President Vicente Fox used chocolate cake and innuendo to hit President Trump on Wednesday. Fox used a photo of his own inauguration in Mexico to call out Trump for what he viewed as his fixation with the crowd size at his inauguration.

Fox said it was one of the proudest moments of his life to know that he was assuming the burden of “a million expectations” and that he must do his best to “be worthy of that trust.”

“This is you, in the most solemn moment of your life,” Fox said holding up a photo of Trump’s inauguration. “Thinking about how big your crowd was. Worrying that the last guy had a bigger one than you.”

The video was made by YouTube comedian Vic Berger and was posted to his hilarious Super Deluxe channel.