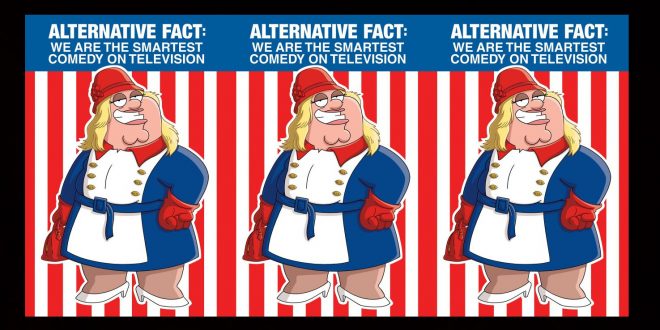 Family Guy is campaigning for the Emmys in its traditional manner: by going on the offensive. In a new for-your-consideration mailer that was sent to Emmy voters this week, Peter Griffin is doing his best impression of White House counselor and Anderson Cooper eyeroll recipient Kellyanne Conway, dressed in the $3600 red, white, and blue Gucci coat that she wore to President Donald Trump’s inauguration.

Above the Kellyanne-ified Peter, the ad reads, “Alternative Fact: We are the smartest comedy on television,” a jab at Conway’s use of the phrase “alternative facts” to defend Sean Spicer’s false claim that Trump’s inauguration was the largest ever. Last year’s mailer went after Trump himself. Peter Griffin was presented as then-candidate Trump with a combover ‘do and orange skin, asking: “As long as we’re voting for dumb loudmouths, can I get an Emmy?” Previous POOR OPTICS: Trump Scraps Visit To FBI Headquarters After Being Told He Wouldn’t Get A Standing Ovation
Next FBI Sources: James Comey Didn’t Seek Dinner With Trump, Never Told Him He’s Not Under Investigation