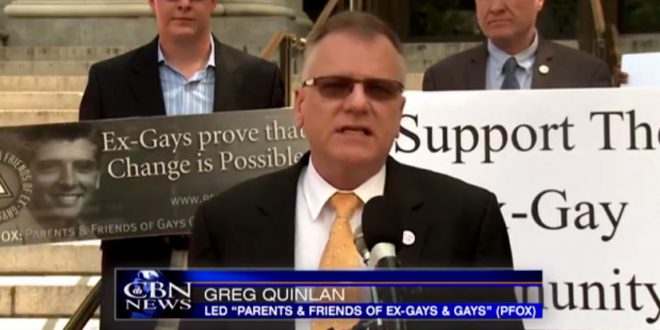 Last month the SPLC mentioned ex-gay torture leader Greg Quinlan as being among the speakers at an event staged in opposition to GLSEN’s annual campaign to stop the often-violent bullying of LGBT kids. Quinlan says he’s proud to be named as a hater. From the AFA’s OneNewsNow:

“It just goes on and talks about how I left homosexuality,” he tells OneNewsNow. “I’m past president of PFOX, I’m the founder of an anti-LGBT group called Garden State Families of New Jersey, and my crime is that I purport to advocate for the natural family.” That is to say he supports male-female marriage and the biological children they produce. “It also says I use the term ‘homofacism’, which I do, and that it threatens liberty, and [I also support] anti-homosexual legislation,” he says. “Now this is all true. These are things I’ve absolutely said and I take credit for it. And I have to say I’m honored to be hated by those who hate for a living, and that’s what the SPLC does.”

PREVIOUSLY ON JMG: Quinlan says gay men are sexual cannibals. Quinlan says he’s gay because he was molested. Quinlan defends the “ex-gay” therapy of Ladybird Bachmann. Quinlan claims gay activist Wayne Besen threatened to inject him with AIDS. Quinlan testifies against New Jersey marriage. Quinlan works to increase attacks on LGBT children. Quinlan attempts to distribute “ex-gay” flyers at public schools. Quinn demands that CDC cease linking gay sites in harm reduction campaign. Quinlan files SCOTUS brief in support of DOMA. Quinlan speaks at “Ex-Gay” Pride Month event. Quinlan’s wife of three years files for divorce, presumably due to lack of getting fucked. And finally, Quinlan brags that he was a butch stud back when he was still taking cock up the ass: