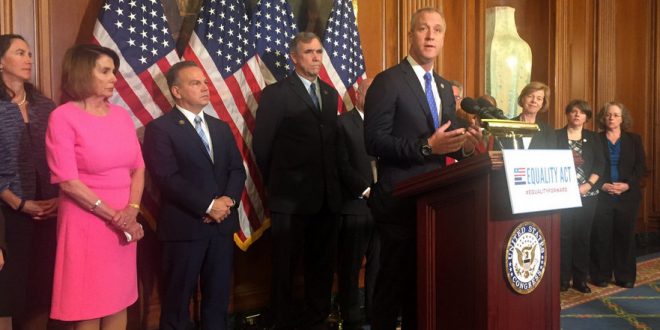 Today, HRC joined with bipartisan lawmakers and an unprecedented number of businesses to announce the re-introduction of the Equality Act — federal legislation that would finally guarantee explicit, permanent protections for LGBTQ people under our nation’s existing civil rights laws.

The bipartisan legislation would provide clear and equal protections under federal law for all Americans in vital areas of life, like employment, access to public spaces, housing, credit, education, jury service, and federally-funded programs. Today, in a majority of U.S. states (31), LGBTQ people remain at risk of being fired, evicted or denied services because of who they are.

“No person’s fundamental rights should be determined by which side of a state line they live on,” said HRC President Chad Griffin. “The Equality Act will once and for all end the unacceptable patchwork of non-discrimination laws across this country that leaves LGBTQ people at risk. Every American should have a fair chance to earn a living, provide for their families, and live their lives without fear of discrimination. And at its core, that’s what the Equality Act is all about.”

The Equality Act is co-sponsored by 241 members of Congress. It was first introduced in 2015 by Representative David Cicilline (D-RI) and by Senators Jeff Merkley (D-OR), Tammy Baldwin (D-WI) and Cory Booker (D-NJ).

.@RepSeanMaloney says no longer a majority who want to discriminate against #LGBT people, but a minority blocking #EqualityAct in Congress. pic.twitter.com/VRp8aUgOhV

Wonderful to be joined by my colleagues in supporting the #EqualityAct. Dems will fight with our full strength to protect all families! pic.twitter.com/6wWffpEM2M

.@SenatorBaldwin says "too many Americans rely on a patchwork of laws" for protection from discrimination. #EqualityAct pic.twitter.com/QscqrZsQfW

Discrimination has no place in our country. Proud to join my colleagues to introduce the Equality Act. #EqualityForward pic.twitter.com/X708FbY3U5

Our country has come too far to turn back now—now is the time to pass the Equality Act. #Equalityforward pic.twitter.com/f6azzVs9UT