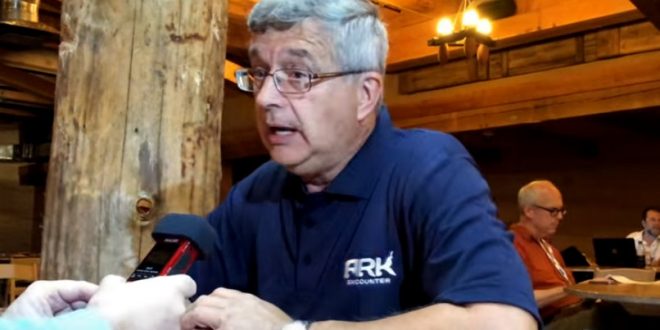 “How did the Grand Canyon form?” is a question so commonly pondered that YouTube is rife with explanations. Go down into the long tail of Grand Canyon videos, and you’ll eventually find at a two-part, 35-minute lecture by Andrew Snelling.

The first sign this isn’t a typical geology lecture comes comes about a minute in, when Snelling proclaims, “The Grand Canyon does provide a testament to the biblical account of Earth’s history.”

Snelling is a prominent young-Earth creationist. For years, he has given lectures, guided biblical-themed Grand Canyon rafting tours, and worked for the nonprofit Answers in Genesis. (The CEO of Answers in Genesis, Ken Ham, is also behind the Creation Museum and the Ark Encounter theme park.)

Young-Earth creationism, in contrast to other forms of creationism, specifically holds that the Earth is only thousands of years old. Snelling believes that the Grand Canyon formed after Noah’s flood—and he now claims the U.S. government is blocking his research in the canyon because of his religious views.

The suit was filed by the Alliance Defending Freedom. Of course. From their press release:

Alliance Defending Freedom allied attorney Michael L. Kitchen, along with ADF staff attorneys, filed suit in federal court Tuesday against the U.S. Department of the Interior, the National Park Service, and Grand Canyon National Park on behalf of an experienced geologist who was denied a research permit because of his Christian beliefs.

Dr. Andrew Snelling holds a Ph.D. in Geology from the internationally acclaimed University of Sydney. Dr. Snelling has conducted geological research in Australia and the United States, published works in peer-reviewed journals, and has substantial field and laboratory experience with both theoretical and practical geological research.

Nonetheless, National Park Service officials denied his routine request to obtain a few fist-sized rock samples from the Grand Canyon after learning of his Christian views about the Earth’s beginnings. Despite the fact that Dr. Snelling had accomplished prior research in the Canyon, Park officials ran him through a gamut of red tape for more than three years.

When public records requests revealed that Park officials were specifically discriminating against Dr. Snelling’s faith, additional requests for the research permit to be issued were made by attorneys and even a member of the United States Congress. Only after the Park Service failed to respond to those repeated requests did Dr. Snelling bring suit against the officials.

The Park Service says Snelling’s request was denied because the rocks he seeks can easily be found outside the Grand Canyon and because his research is not scientifically valid. (Tipped by JMG reader Stephen)

Previous Reuters: Trump Campaign Contacted Russia 18 Times
Next Trump: This Is The Greatest Witch Hunt Of All Time!