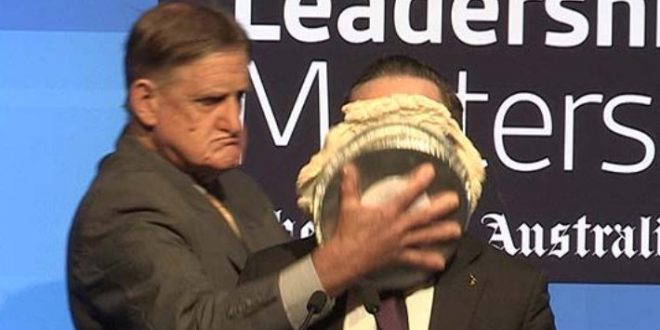 The CEO of Australian airline Qantas says he’ll continue to publicly support same-sex marriage after he was attacked with a pie over the issue. “My opinion on this has not changed,” Alan Joyce said in a statement Wednesday. “We’ll continue to speak about important social issues including indigenous reconciliation, gender diversity and marriage equality, because it’s the right thing to do.”

A man rubbed a pie in Joyce’s face at a business event on Tuesday morning just as the CEO began delivering a speech. The assailant, Tony Overheu, has since spoken to Australian media, saying he wanted to make a statement about Joyce’s support for same-sex marriage. “There’s some really crude stuff going on here, and Joyce has been very much leading the issue,” Overheu told 7News.

The man who shoved a lemon meringue pie into Alan Joyce’s face thinks the Qantas chief executive is part of a network of corporate figures trying to impose gay marriage on Australians. Despite Tony Overheu emailing Joyce an unreserved apology for Tuesday’s stunt, the multi-millionaire isn’t turning the other cheek.

“The police are continuing their investigation and my intention is to send a message that this type of behaviour isn’t acceptable and that I will have every intention of pressing charges,” Joyce told reporters on Wednesday. Overheu, 67, is a devout Christian and senior member of the Church of Christ and Full Gospel Business Men’s Fellowship International.

Besides being arrested and attracting international attention, Overheu is also in trouble at home. He says his wife was furious for actions that were not consistent with Christianity, while one of his daughters posted a message on social media supporting same-sex marriage but saying: “I love my idiot dad.”