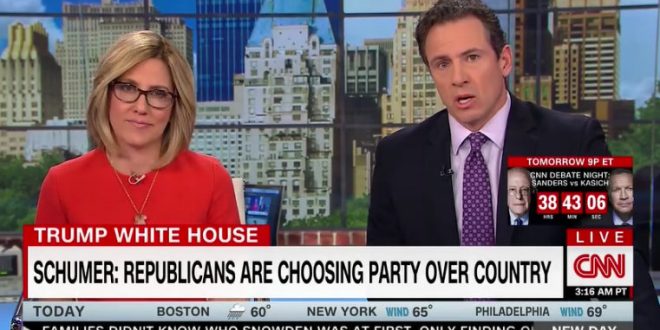 Chris Cuomo: Nobody In The Republican Leadership Will Appear On CNN To Defend James Comey’s Firing

According to CNN’s Chris Cuomo, no one in the Republican leadership would appear Monday morning to defend President Donald Trump’s firing of former FBI director James Comey. Cuomo cited Sen. Chuck Schumer (D-NY), who asked whether any patriotic Republicans were willing to put country ahead of party.

“It is a pickle the president has put his party in here,” Cuomo noted. “That’s what leadership is about, right? If you choose to ignore, you are in effect, empowering whatever you ignore.”

Commentator David Gregory agreed, but said that he believes it is “demeaning to reduce the conversation and controversy to partisan politics and allowing a conversation to unfold that the Democrats are being hypocrites because they wanted Comey out all along. Come on. Focus on what was done. They made up a reason to get rid of Comey.”

Hit the link for the video.