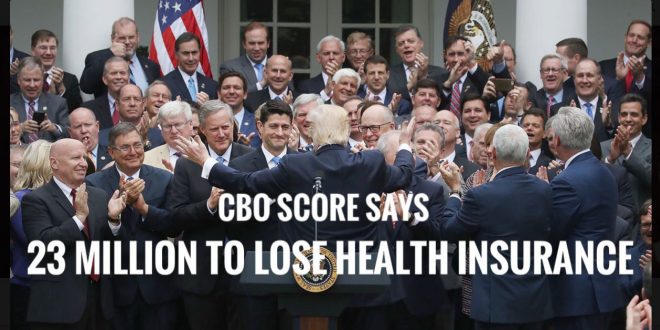 The current Republican bill to repeal and replace major parts of Obamacare will lead to 23 million more Americans not having health insurance coverage by 2026 if it becomes law, the Congressional Budget Office projected Wednesday.

That is only 1 million fewer uninsured people than the 24 million people more uninsured that had been projected for an earlier version of the GOP bill. Most of the coverage losses still would occur next year, when 14 million more people would become uninsured than would otherwise be if Obamacare remained in place, CBO said in its new report.

The Senate has already said it will make substantial changes to the measure passed by the House, but even Senator Mitch McConnell of Kentucky, the majority leader, is sounding uncertain about his chances of finding a majority to repeal and replace the health law. “I don’t know how we get to 50 at the moment,” Mr. McConnell told Reuters on Wednesday. “But that’s the goal.” 🚨 in new CBO report: undermines GOP argument that ppl with preexisting conds won't be hurt. CBO says they will. pic.twitter.com/UTprliGnk9

Quite a paragraph in the CBO report – expects law would greatly destabilize insurance markets. pic.twitter.com/FQnMsfagz5