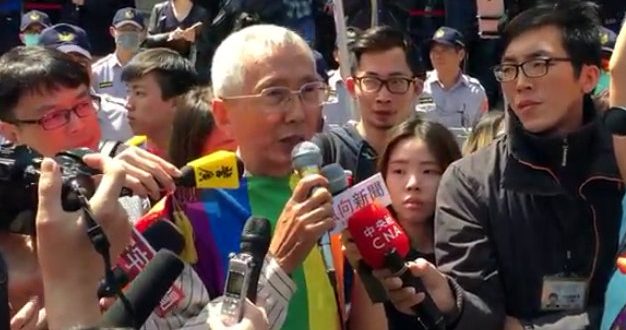 Taiwan’s top court, the Council of Grand Justices, ruled in favour of gay marriage on Wednesday, the first landmark ruling in Asia on same-sex unions. The ruling by a panel of 14 grand justices in Taipei said the current law that bars same-sex marriage is a violation of the constitution – making the island the first place in Asia to legalise gay unions. LGBT right groups are holding a rally near the legislature building in support of marriage equality which is expected to continue until 8pm. Opponents are expected to respond to the ruling shortly.

Veteran gay rights activist Chi Chia-wei, 59 [photo], took the case to Taiwan’s top court – which interprets the constitution – two years ago. He asked if the current law violated the constitution after his attempt to register a marriage to another man was rejected by a Taipei household registration office in 2013 and subsequent appeals failed. Taipei city’s Department of Civil affairs later filed a similar request for a constitutional interpretation of the issue after receiving a growing number of same-sex marriage requests since Chi’s case, despite strong opposition from conservative groups.

The panel of judges has given the island’s parliament, known as the Legislative Yuan, two years to amend or enact new laws, which could potentially make Taiwan the first place in Asia to allow same-sex marriage. We feel that this is a huge success for the LGBT and marriage equality movement in Taiwan,” said Wayne Lin, an activist who runs an LGBT hotline in Taiwan. “We want to amend the Civil Code so same-sex couples can get married… our target is to complete this whole process within this year.”

Draft legislation is already making its way through Taiwan’s parliament but had stalled. Tsai Ing-wen, Taiwan’s first female president, expressed support for gay marriage before her election in 2016. In the face of love, everyone is equal,” she said in a Facebook video during 2015’s gay pride parade. “I support marriage equality. Every person should be able to look for love freely, and freely seek their own happiness.”

Out of the 14 Grand Justices, it appears that two dissented and one recused, effectively delivering an 11-2 decision.

As you will see below, today’s ruling also appears to write sexual orientation protections into the Taiwanese constitution and it rejects procreation as a relevant factor for entering into a marriage.

Later today I’ll have reactions and analysis from US-based LGBT and civil rights groups. And probably some sadz from the haters, who will surely launch an offensive in the legislature.