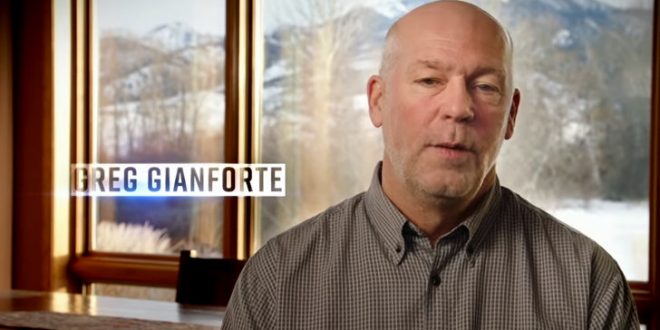 The Republican candidate for Montana’s congressional seat slammed a Guardian reporter to the floor on the eve of the state’s special election, breaking his glasses and shouting, “Get the hell out of here.”

Ben Jacobs, a Guardian political reporter, was asking Greg Gianforte, a tech millionaire running for the seat vacated by Ryan Zinke, about the Republican healthcare plan when the candidate allegedly “body-slammed” the reporter.

“He took me to the ground,” Jacobs said by phone from the back of an ambulance. “This is the strangest thing that has ever happened to me in reporting on politics.” Jacobs subsequently reported the incident to the police. Gianforte’s campaign did not immediately respond to requests for comment.

Audio of the abortive interview recorded by Jacobs captures the altercation, and appears to reference previous questioning from another Guardian reporter. “I’m sick and tired of you guys,” Gianforte said. “The last guy who came here did the same thing. Get the hell out of here. Get the hell out of here. The last guy did the same thing. Are you with the Guardian?”

Gianforte is likely livid about this Guardian report by Ben Jacobs from late last month:

A Republican congressional candidate has financial ties to a number of Russian companies that have been sanctioned by the US, the Guardian has learned. Greg Gianforte, who is the GOP standard bearer in the upcoming special election in Montana, owns just under $250,000 in shares in two index funds that are invested in the Russian economy to match its overall performance.

According to a financial disclosure filed with the clerk of the House of Representatives, the Montana tech mogul owns almost $150,000 worth of shares in VanEck Vectors Russia ETF and $92,400 in the IShares MSCF Russia ETF fund. Both are indexed to the Russian equities market and have significant holdings in companies such as Gazprom and Rosneft that came under US sanctions in the aftermath of the Russian invasion of the Crimea.

The holdings, while substantial, make up only a small portion of Gianforte’s wealth. The congressional candidate, who made a fortune starting a software company which was later sold to Oracle, has assets estimated to be worth between $65m and $315m, according to his financial disclosure.

The cops are there taking witness statements after Gianforte attacked a reporter. Is he leaving the scene of a crime? https://t.co/jlwlEwkVEx

This Violent Radical Trump Republican is named @GregForMontana Gianforte and he should be in jail right now #LockHimUp https://t.co/t4zqLOe6zm

Previous BRITAIN: Furious Theresa May To Confront Trump At NATO Meeting Over New US Leaks Of Terrorism Intel
Next Montana Papers Retract Endorsements Of Gianforte