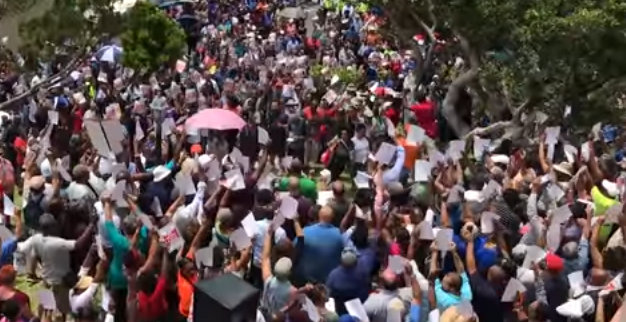 Thousands rallied behind same-sex union opponents Preserve Marriage yesterday outside Parliament, alongside a smaller peaceful demonstration by supporters of same-sex marriage. Addressed by various speakers, the crowd reiterated calls for the Government to appeal the Supreme Court’s decision permitting same-sex unions. While the group’s charitable status has been revoked, Preserve Marriage vowed to continue as a registered company with more than 500 members.

“We are not to be bullied into silence, and we want to encourage Bermuda to stand for marriage,” one speaker told the crowd, maintaining that the group had been hit with “hate speech and biased reporting”. Crowds flocked to the grounds of the House of Assembly, with onlookers lining the streets, many carrying signs reading: “I am standing today for marriage to be between a man and a woman for Bermuda’s next generation.”

The crowd also chanted: “One woman, one man, we need to take a stand.” Other signs opposed to same-sex marriage visible at the demonstration included: “Obedience is better than sacrifice,” and “2 **** boy can’t get married”. Signs among supporters of the Rainbow Alliance of Bermuda included: “Let’s have the humility to leave the final judgment to God himself”, and “Love wins”.

Previous BRITAIN: Ariana Grande To Return To Manchester For Concert To Benefit Victims, “We Won’t Let Hate Win”
Next Trump Wishes Muslims “Joyful Ramadan” In Statement That Mostly Says “You Need To Stop Being Terrorists”