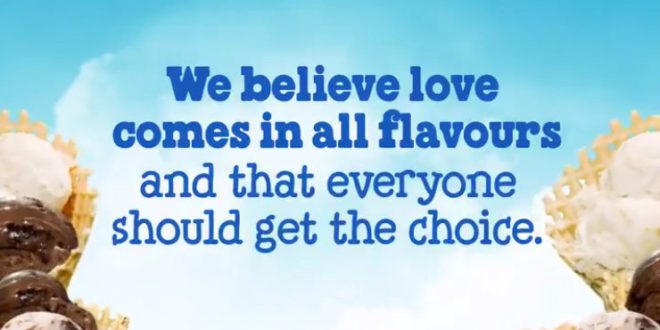 Declaring “love comes in all flavors,” Ben & Jerry’s said Thursday it’s banning its Australian customers from buying two scoops of the same flavor of ice cream until same-sex marriage is legalized across the country. Ben & Jerry’s, based in Vermont, is famous for its socially conscious advocacy, from combatting climate change to promoting ethical treatment of animals.

But the Australian same-sex marriage campaign is unusually serious even for Ben & Jerry’s, which asked Australians in a statement to imagine “how furious you would be if you were told you were not allowed to marry the person you love.”

“So we are banning two scoops of the same flavor and encouraging our fans to contact their MPs to tell them that the time has come — make marriage equality legal!” the statement said. The “no-same-flavor” rule is mostly symbolic, as Ben & Jerry’s has only 26 stores across the enormous country. But the underlying message is serious.

We’re banning any same-flavour love in the fight for #marriageequality! Join us by signing petition to get Australia moving. pic.twitter.com/DV5MHOrCsZ