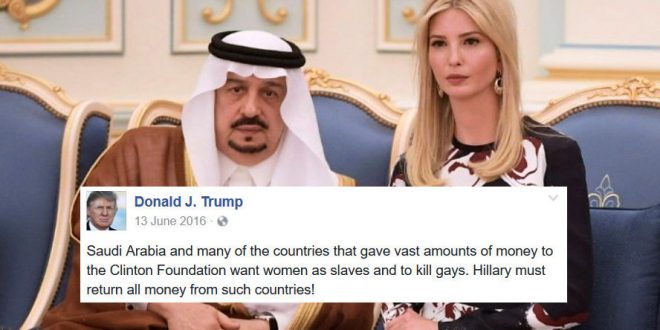 The World Bank plans to announce Sunday at an event with Ivanka Trump, the U.S. president’s daughter and senior White House adviser, that Saudi Arabia and United Arab Emirates have pledged $100 million collectively toward a fund for women who own or want to start businesses, according to people familiar with the announcement.

The money for the bank’s proposed Women Entrepreneurs Fund would be aimed at women in the Middle East, these people said. They described the fund’s goal as helping women start and run successful businesses by easing their access to finance, markets and networks.

“This facility has clear alignment with our broader work to advance women’s economic empowerment,” World Bank President Jim Yong Kim said in a statement thanking Saudi Arabia, the U.A.E. and Ms. Trump. “We look forward to launching the facility later this year.”

This is virtually identical to what Trump and others in GOP criticized Clinton Foundation for. https://t.co/AcwddFeuYW

If you criticized the Clinton Foundation you should criticize this too. https://t.co/jDHqLJZuSW

It's like when they donated to Clinton Foundation, but without Fox News saying Ivanka should be put in prison for it https://t.co/8ed2j2kcPz

Trump criticizing Hillary for accepting $ from Saudi Arabia. Ivanka's proposed foundation will be taking $100 mill from S.A. and U.A.E. pic.twitter.com/Wt301oZ3Tn

Launching her "foundation" WHILE ON THE JOB working for the White House and taking foreign cash to boot. These Trumps are something else. https://t.co/sUXKfreYV7