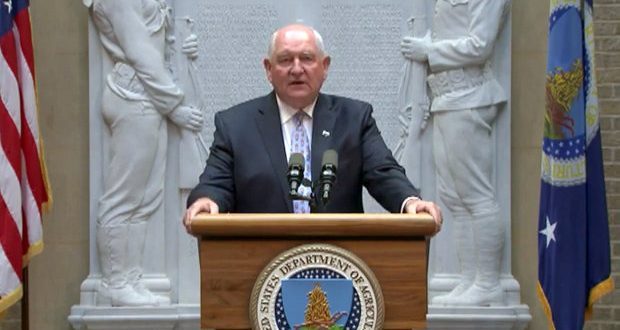 Agriculture Secretary Sonny Perdue, who as Georgia governor once held a public prayer vigil for rain, has responded to Trump’s recent religious liberty executive order by issuing a letter authorizing USDA-inspected plants to post any anti-LGBT materials they like.

Perdue’s edict likely arises from the case of the West Michigan Beef Company, whose CEO Don Vander Boon reacted to the 2015 Obergefell ruling by placing an anti-LGBT screed in his employees’ break room.

Titled “10 Reasons Why Homosexual ‘Marriage’ Is Always Harmful And Must Be Opposed,” the rant was authored by the viciously anti-LGBT red-caped Catholic loons of Tradition, Family, & Property.

USDA inspectors, who by law are constantly present at every meat processing facility, warned the CEO that his message to employees constituted unlawful harassment and unless he removed it, they would leave, effectively shuttering his business. And thus another martyr to the “gay agenda” was born.

Tony Perkins has rushed out an applauding statement:

Family Research Council will work with the administration to ensure the practical effect of this policy protects the First Freedoms of Americans like Don Vander Boon. In light of Secretary Perdue’s policy statement reestablishing respect for free speech and religious freedom, I am very optimistic that the Vander Boon’s complaint against the USDA will be resolved in a positive manner that fully respects the First Amendment. It is refreshing to have a president and administration that recognizes and understands the dangers of the anti-faith policies of the previous administration and are therefore committed to undo those policies and restoring true religious freedom. No American — Christian or otherwise — should have to choose between their careers and their faith.