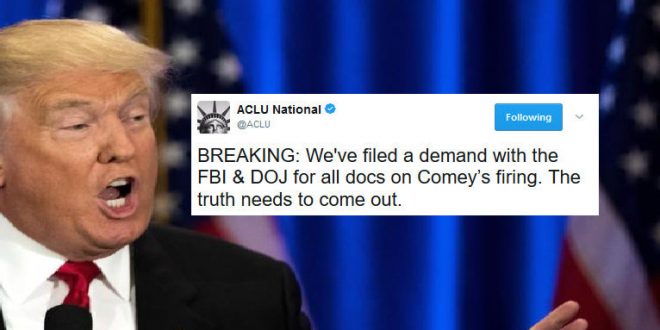 The American Civil Liberties Union today filed a Freedom of Information Act request with the Justice Department and FBI asking for all records related to President Trump’s dismissal of FBI Director James Comey.

“White House interference with any FBI investigation is incompatible with democratic safeguards, and that’s especially the case when the investigation involves the president or his associates. Political meddling with law enforcement investigations is a recipe for abuse of power,” said ACLU Hina Shamsi, director of the ACLU National Security Project.

“The public has a right to know why Comey was fired so the president can be held accountable for any abuse of his position. It’s impossible to know the truth right now because the Trump administration has issued shifting explanations, each of which is increasingly troubling.”

The ACLU has called for the appointment of a special prosecutor and the creation of a select congressional committee to investigate the Trump campaign’s ties to Russia.