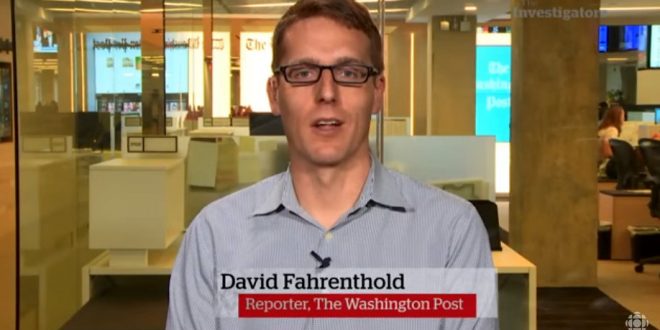 Washington Post reporter David Fahrenthold remembers being struck by Donald Trump’s pledge to donate $6 million, including $1 million of his personal funds, to veteran groups during a televised fundraiser before the Iowa caucuses early last year. Did Trump follow through, he wondered? So, weeks after the event, Fahrenthold started asking questions.

For several months, he found, the answer was no, despite assurances to the contrary from Trump’s campaign. When Trump finally made the donation in late May the reporter set off on a broader inquiry. In a detailed series of articles, he found that many of Trump’s philanthropic claims over the years had been exaggerated, and often weren’t truly charitable activities at all.

On Monday, Fahrenthold’s investigative digging was rewarded with the Pulitzer Prize, journalism’s most prestigious award. His work documenting the future president’s charitable practices won the award for national reporting.

Fahrenthold’s Pulitzer-winning package of stories also included his article disclosing that Trump had made crude comments and bragged about groping women during an unaired portion of an interview on “Access Hollywood” in 2005.

Congratulations to @Fahrenthold and the @washingtonpost! pic.twitter.com/kHp8bxcj52

Previous ALABAMA: Wife Of GOP Governor Read His Love Texts To Mistress In Real Time On His State-Issued iPad
Next OKLAHOMA: Teenage Pages Warned “Cross-Dressers Are In The Building” During Capitol Visit By LGBT Youth