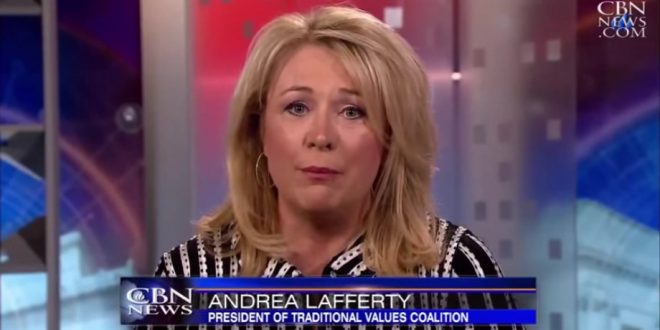 The Virginia Supreme Court has dealt a blow to a bid to overturn protections for gay and transgender students at a northern Virginia school district.

Andrea Lafferty, president of the Traditional Values Coalition, and a student filed a lawsuit after the Fairfax County School Board voted to add “sexual orientation” and “gender identity” to its non-discrimination policy. They argued that the policy is unlawful because such protections aren’t included in state law.

The state Supreme Court on Thursday upheld a lower court ruling dismissing the lawsuit. The Supreme Court said Lafferty and the student lacked standing to bring the challenge. The justices wrote that the student’s “general distress” over the non-discrimination policy isn’t enough to allow him to bring a lawsuit against the school.

Lafferty’s group was represented by the losingest losers who ever lose’d out of Lose Town, the Liberty Counsel. They react via press release:

“While the Fairfax Country School Board temporarily dodged the issue, new developments in the application of this unlawful policy may result in a new suit. There is no doubt the school board intends to enforce this policy,” said Mat Staver, Founder and Chairman of Liberty Counsel.

“Liberty Counsel is not finished fighting for the safety of Jack Doe and public school students in Fairfax County. We are exploring all possible avenues to further challenge these policies and are confident that we will prevail when the courts reach the merits of these challenges,” said Staver.