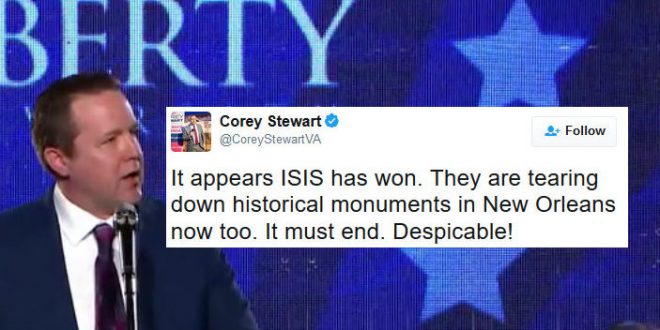 Virginia Republican politician Corey Stewart, the former chairman of Donald Trump’s Virginia campaign who is currently running for governor, took to Twitter this morning to denounce the removal of a Confederate monument in New Orleans, likening the move to actions committed by the terrorist group ISIS.

Stewart has become an outspoken defender of Confederate monuments, including one in Charlottesville, Virginia, where, according to the Washington Post, he compared “those who wanted to remove the statue to tyrants and Nazis.”

Last month fellow Republicans called for Stewart to withdraw from the race after he called an opponent a “cuckservative.” Last year Stewart was fired from the Trump campaign after he staged an unauthorized protest outside GOP national headquarters.

It appears ISIS has won. They are tearing down historical monuments in New Orleans now too. It must end. Despicable!https://t.co/hrO0cLozos

If I believe in it, I will fight for it. It’s that simple #TakeBackVA #TeamCorey pic.twitter.com/QSVept2j1y