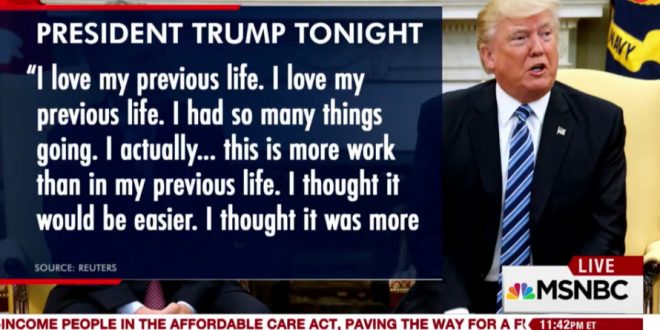 Trump: I Thought Presidenting Would Be Easier

Donald Trump spent a great portion of 2016 insisting that being president would be easy — at least for him. HuffPost compiled a number of examples of him dismissing the problems that accompany the job as being easily dispatched.

Building a wall on the border with Mexico is easy. Beating Hillary Clinton would be easy. Renegotiating the Iran deal would be easy. Paying down the national debt would be easy. Acting presidential? Easy. To a reporter from Reuters this week, though, Trump had a slightly different assessment of the presidency.

“I love my previous life. I had so many things going. This is more work than in my previous life,” Trump said. “I thought it would be easier. I thought it was more of a … I’m a details-oriented person. I think you’d say that, but I do miss my old life. I like to work so that’s not a problem but this is actually more work.”