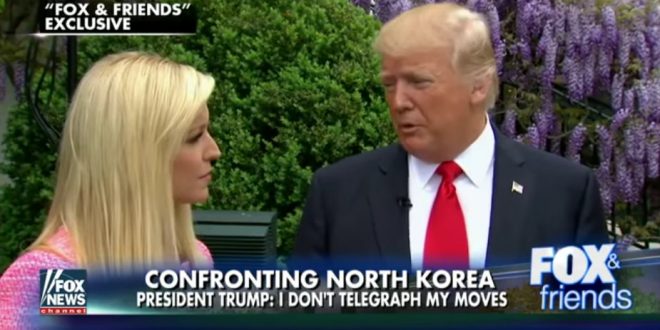 Speaking exclusively to “Fox & Friends” Tuesday, the commander-in-chief hinted at his own growing frustration with dictator Kim Jong Un, and indicated he won’t appease the tyrant’s continued saber rattling. “I don’t want to telegraph what I’m doing or what I’m thinking … we’ll see what happens,” Trump told “Fox & Friends” Tuesday. “I hope things work out well. I hope there’s going to be peace. But you know, they’ve been talking with this gentleman for a long time … everybody’s been outplayed. They’ve all been outplayed by this gentleman and we’ll see what happens.” Asked what would happen if North Korea were to test another missile – as it has vowed to do – Trump cryptically replied: “We’ll find out.”

Global observers with even the vaguest interest in the rogue peninsular understand these types of basic details about North Korea. US president Donald Trump, however, may not. Asked by Fox & Friends co-host Ainsley Earhardt on April 17 whether he has ruled out a military strike on Pyongyang, Trump repeatedly referred to North Korea’s leader as “this gentleman” — and implied he was dealing with the same “gentleman” that former presidents Bill Clinton and Barack Obama had grappled with. Unfortunately for Trump, the “gentleman” Clinton was talking to during his presidency was in fact Kim Jong-il—the now-deceased father of Kim Jong-un.

Literally, COME AT ME, BRO!

That’s who’s in charge of the nuclear weapons. https://t.co/mSq8duq7fL